A helping hand to rebuild after Batlow’s devastating bushfires

A sobering account of the aftermath from imei’s Jan Heys

When imei asked our staff to suggest a worthy recipient of our fundraising efforts, Jan Heys suggested Batlow gofundme, where the fire has destroyed 20 plus homes, apple orchards, thousands of animals, a great deal of agricultural and horticultural infrastructure, and sadly one man lost his life helping to fight the fires.

We raised a total of $1,716 which we sent to the Batlow CWA – our small contribution to help them start getting back on their feet.

Jan recently visited Batlow with her husband to support the local community – these are her observations and insights:

My husband and I visited Batlow over the Australia Day weekend.

It was quite a sobering adventure!

We based ourselves in Tumut which is a 30 min drive from Batlow. Accommodation was scarce even in Tumut. As we discovered, accommodation was taken up with Rural Fire service crews and Energy workers who have been in town for some time.

The RFS were slowly leaving town as the fire situation has improved and most of these crews are volunteers. However the Energy crews still have work to complete.

Many local businesses have been providing lunches to these crews. An example is “The pie in the sky” shop, whose day was beginning around 4am as the crews were leaving town around 7.30 to begin their days tasks, and lunch was needed.

The Australian Defence force have setup camp adjacent to the Showground/Racecourse/ Sports ground in Tumut. Rows of tents along with a Mess Tent and many different heavy vehicles created a camp site. It was great to see them interacting with local kids allowing them to explore the vehicles etc.

We joined the Batlow community for Australia Day breakfast, it was a hard to explain the atmosphere here.

There was a speech by one farmer whose property was affected, however his house was saved much to his amazement. His sheds gone, but not his tractor. His 2 milking goats were left with a neighbour, who chose not to evacuate after the town was declared “Undefendable”. Somehow the goats survived, but the bale of hay left in the same place was a pile of ash!

He spoke of how one of the goats was expecting, and has now delivered a baby goat (called kids) he used this as an analogy, that they can go on.

It is quite surprising to see one house gone but the one next door standing or a shed gone but the house still there.

The apple orchards have been damaged. Some lost completely, many others with the outer rows of trees damaged by heat and or fire.

Many faced with the decisions whether to stay or to cut their losses and go.

We spoke to an Air Force chap who is based in Townsville, one of his tasks was delivering hay to farmers whose paddocks had been burnt out. You may ask what could the Air Force provide – well they have a re-fueling vehicle that goes out full of diesel to replenish the tractors and other heavy machinery that could be clearing fire trails or creating fire breaks.

Over all it was a great weekend, (especially as we found a pub selling Batlow Cloudy Cider for hubby), seeing how people work together when needed. 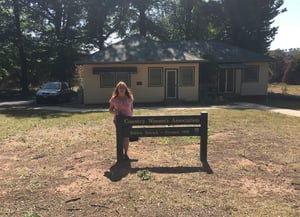 The message we received from Tina at the Country Women’s Association was one of sincere appreciation for our fund raising efforts and thinking of their town.

So if you have a spare weekend coming up, I strongly suggest you consider a trip to either the South Coast, who have lost all their income from the Summer/Christmas visitors, or to another fire affected area.